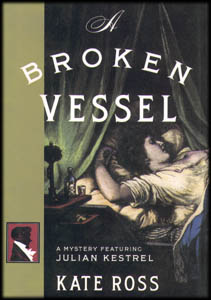 No detection team was ever more mismatched: Julian Kestrel, the debonair and elegant regency dandy, and Sally Stokes, a bold and bewitching Cockney prostitute and thief. But one night fate throws them together, giving them the only clue that can unmask a diabolical killer.

It all starts in London's notorious Haymarket District, where Sally picks up three men one after the other and nicknames them Bristles, Blue Eyes, and Blinkers. From each of them Sally steals a handkerchief -- and from one she mistakenly steals a letter that contains an urgent appeal for help as well. But which man did she get the letter from? Who is the distraught young woman who wrote it? And where is she being held against her will? These questions take on a new urgency when Sally finds the writer of the letter -- dead.

Luckily, Sally's brother is none other than Dipper, reformed pickpocket and now valet to gifted amateur sleuth Julian Kestrel. The authorities dismiss the girl's death as suicide, but to Kestrel it looks more like murder. To prove it, he must track down Bristles, Blue Eyes, and Blinkers, and find out which of them had the dead girl's letter. Sally uses all her ingenuity and daring to help Kestrel solve his case. But she is out to solve another mystery as well: is there a man of flesh and blood under Kestrel's impeccable clothes?

A Broken Vessel was the 1994 winner of the Historicon's Gargoyle Award for Best Historical Mystery.

"For this swaggering walk on the dark side of a gilded era, Ms. Ross writes vividly of the sights, sounds and depravities of the day."
The New York Times Book Review

"Makes you wonder if Julian might be the most likeable and accomplished historical detective since Brother Cadfael."
Kirkus Reviews