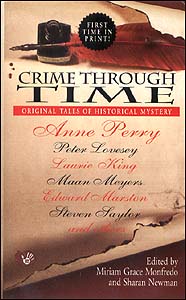 Kate Ross has a secret life as a Boston attorney but is more generally known as the author of a Regency mystery series showing a society quite different from that of Jane Austin's. In Cut To The Quick, she introduced her mysterious dandy and amateur sleuth, Julian Kestrel. This was followed by the award-winning, A Broken Vessel, then Whom The Gods Love and The Devil In Music, in which Julian takes the Grand Tour of Italy.

Kate is very clear on why she was intrigued by the Regency Period. "The 1820's in England marks a fascinating transition between the swashbuckling 1700s and the workaday Victorian world. In addition, the dandy of the period -- elegant, observant, witty, detail-oriented, and cool under fire -- makes a terrific sleuth. Finally, 1820s England is a good hunting ground for an amateur detective because of the lack of a professional police. I do, however, hope to take the series to the founding of Scotland Yard's Metropolitan Police in 1829."

In the following story Julian Kestrel once again has to travel from elegant estates to the filth and despair of London prisons to find the answer to the mystery of "The Lullaby Cheat".

Today's best American and British authors are featured in this outstanding collection of original historical mysteries. The stories in Crime Through Time span thousands of years -- from Steven Saylor's ancient Rome to Anne Perry's Victorian England -- and feature an amazing variety of detectives -- from Peter Lovesey's Prince Albert to Maan Meyer's Charles Dickens to Laurie King's Mrs. Hudson, housekeeper to Sherlock Holmes and a star sleuth in her own right.

These twenty-one historical whodunits were written specifically for this volume and are appearing for the first time in print. Edited be bestselling authors Miriam Grace Monfredo and Sharan Newmon, this one-of-a-kind anthology will appeal to history buffs, mystery buffs, and anyone who loves a good story.